From the 4th to the 7th of September 2006, the Center for Transnational Law (CENTRAL) in cooperation with the German Institution of Arbitration (DIS) organized the 1st Cologne Summer Academy on Business Negotiation and Mediation at the University of Cologne. After three successful Arbitration Academies in the preceding years, 2006 saw two parallel Academies held under the roof of the university, both examining the same case of Apline Laseroptic Technologies (ALT) vs. Nederlands Transcontinental N.V. (NedTrans) from different perspectives. The whole event was headed and inspired by Prof. Dr. Klaus Peter Berger, LL.M., whom all attendants owe thanks for the memorable and horizon-expanding experience of the Academy.

The teaching concept of the Summer Academy is fundamentally based on student participation; the opportunity to engage in interactive group-discussions as well as role-playing exercises enable the participants to absorb the new knowledge in an organic kind of way. The case at hand, of which the highlights were forwarded to the participants by e-mail in advance, is laid down in Prof. Dr. Berger’s book “Private Dispute Resolution in International Business”, a 2 volume book-set with DVD-Rom which can be previewed at www.private-dispute-resolution.net. All participants started the Academy with a professional binder including all relevant documents. 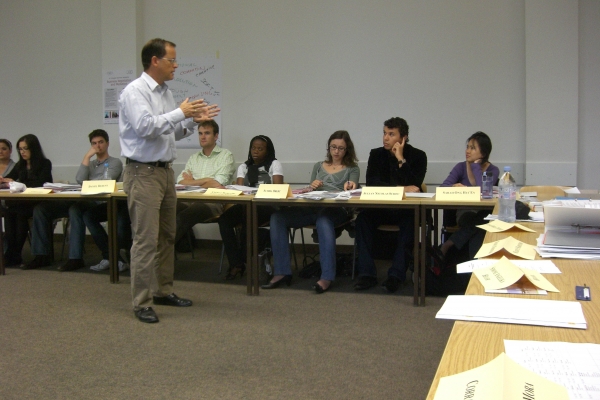 One of the most effective tools for the visualization of the case’s problems were the film clips from the aforementioned DVD-Rom, which were used at specific points within the day’s agenda to illustrate the development of the case. The overall use of multimedia, like projections, films and e-mail communication was extraordinarily woven into the teaching agenda.

The evening before the actual beginning of the academy a small welcome reception (including drinks and snacks) was held at the DIS Office where the participants of both academies had some time to get acquainted both with each other as well as with the officials, who took some time for socialising.

The 1st day Dr. Volker Nienaber, LL.M. [Dr. August Oetker KG, Bielefeld] gave an overview regarding negotiation tactics and conflict theory. The development of the case negotiations were analyzed and discussed in-depth, also the strategic elements, like picking time and place, drafting the agenda and so forth were introduced by Dr. Nienaber.

On the 2nd day Christopher C. Newmark [Baker & McKenzie LLP, London] explained the nature of the mediation process, how it should be prepared and in what way the lawyers could be involved.

The 2nd day basically covered phases one and two of the mediation, whereas on the 3rd day Dr. Jörg Risse, LL.M. [Baker & McKenzie LLP, Frankfurt am Main] introduced phases three and four, covering legal issues as well as actual techniques, which the participants could practice in group role-playing exercises. 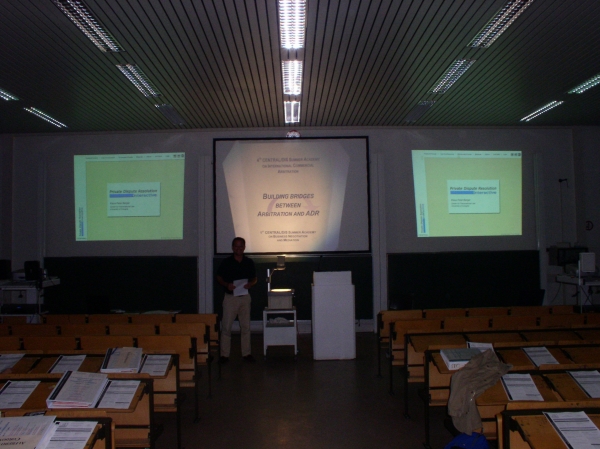 For the 4th and last day of the academy it had originally been planned that Dr. Wolfgang Peter [Python Schifferli Peter, Geneva] should hold the lecture. Unfortunately Dr. Peter was not available, but a more than worthy "substitute" was found with Prof. Dr. Berger himself, with some support of Prof. Martin Hunter who joined the session later. The topics for the day included the settlement agreement with the drafting of the terms, and sadly, also the failure of the mediation process and the subsequent consequences.

Even though the Mediation Academy attendees had to expect the failure of their efforts, since otherwise there wouldn’t have been any more need for Arbitration in this case, quiet a few long faces could be seen in the end, which were lightened up in expectation of the conclusion, to be presented in a joint session together with the participants of the Arbitration Academy.

After the conclusion the actual closing ceremony took place, with applause for each and every participant and especially long lasting applause for the officials, who managed to set up two complete parallel events that drew participants from as far as China, Africa, South-America and from all over Europe. Each participant received a diploma-like document certifying in detail what they had learned, in addition to Prof. Dr. Berger’s book, which many students wanted signed by the author himself after the end of the ceremony.

Unfortunately I was not able to attend the social activities in the evenings, especially the boat-trip, which seems to have become a tradition in connection with the academies and the guided tour through the city of Cologne, but even without these impressions I cannot overemphasize my positive experiences as participant of the 1st Cologne Summer Academy on Business Negotiation and Mediation and would recommend the events organized by Prof. Dr. Berger and the CENTRAL to law students and practitioners all over the world.