The 12th Cologne Academy on International Arbitration took place in the first week of September 2014. Students and young practitioners from all over the world came to Cologne to improve their legal knowledge and advocacy skills in international arbitration.

The  Cologne Academy on International Arbitration offered optimal conditions for effective working and studying. The size of the group was adequate and the premises contributed to a productive learning and working atmosphere. Although the participants had different background knowledge, everybody was involved in the discussions and role plays. The atmosphere between both, the participants and lecturers, was friendly and open. The lecturers expected everybody to take part actively, but never put the participants under pressure. 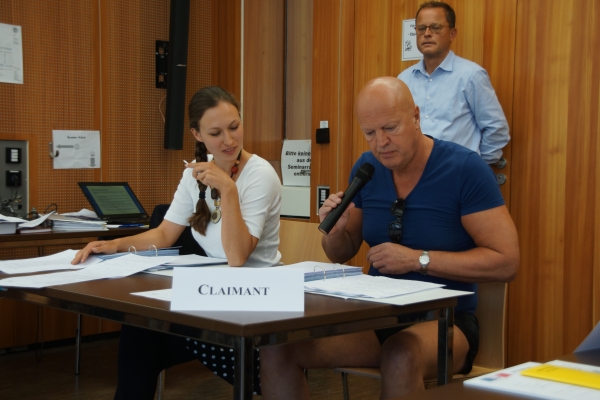 The whole topic was explained on the basis of a case study. The participants had the opportunity to expose the content of the case in advance. Therefore it was easier to understand and imagine the specific facts of the case. This was visualized through a very helpful and at the same time entertaining DVD.

The first lecture on Monday morning was held by Professor Berger and Ruth Mosch giving  a general introduction into arbitration with a focus on the hierarchy of rules. Then the tasks of claimant and respondent were presented. In the afternoon session the participants got a first impression of case management and analysis.

The second day was all about oral pleadings. The course was divided into two groups, claimant and respondent. Furthermore the arbitration tribunal, consisting of two arbitrators and a chairman, was founded. Within a group session, led by Professor Berger and Boris Kasolowsky, the participants formulated their opening statements on jurisdiction and presented them in a role play. In the afternoon session, this was repeated with the opening statements on the merits. 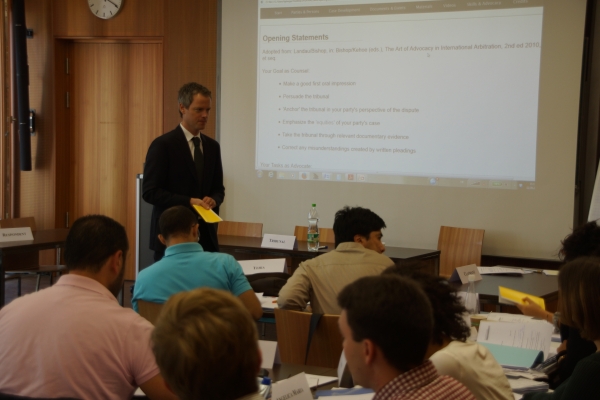 The third day started with an introduction to the topic of how evidence is taken in the field of international arbitration by Steven Finizio. Later on, in a group session the participants worked on the hearing of witnesses and presented their results in a vivid role play in which Professor Berger demonstrated notable acting skills while playing both witnesses. 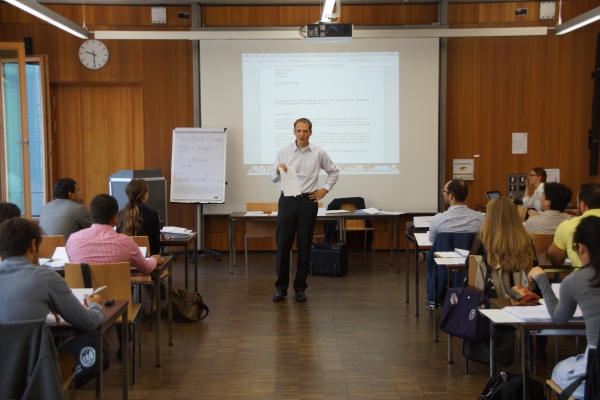 In his lecture on thursday morning Professor Kröll gave some examples on arbitral decision making, followed by a discussion of possible reasons for setting aside.

In the afternoon, in a joint session, in which the mediation group and the arbitration group where reunited, the participants got a short but at the same time really detailed and well-structured overview of how arbitration and mediation are linked together. This was also emphasized by the DVD.

Not only the high quality and well-organized workshops, but also the social programme made this Academy a great experience. It all started with a little get-together on Sunday evening, where the participants had the opportunity to get to know each other and gain an impression of what was to be expected during the following week. Professor Berger gave a short introduction speech and soon, in a friendly and open atmosphere with a light and delicious buffet and drinks, first new contacts were made.

Tuesday night was (as every year) the highlight of the Academy´s social programme: A boat trip with a delicious dinner buffet and drinks. Particularly noteworthy was the beautiful weather, which made this boad trip even more enjoyable. Thus, it was no surprise, that during the beautiful sunset everybody found themselves in a relaxed and festive mood.

All in all the academy achieved all expectations. Not only the learning effect was really impressive due to this interactive way of learning, but on top we met a lot of new interesting people and hopefully future colleagues from all over the world!

After this week one really tend to say: Now I know what arbitration is all about.