The 17th Cologne Academy on International Commercial Arbitration started on Sunday, August 25, 2019, with a welcome reception including finger food and drinks at the seminar building of the University of Cologne.

Professor Berger, head of the Academy, held a welcome speech for the participants who got the first chance to meet and get to know their fellow attendees.

On Monday, classes started at 9:00 a.m. Professor Berger first gave an introduction into arbitration. Afterwards he was joined by Chun-Kyung Paulus Suh, Counsel from the German Arbitration Institute (DIS). Together they provided an insight into the hierarchy of rules and the role of an arbitrator. Additionally, Mr. Suh explained the arbitrational procedure of the DIS.

After the lunch break in the university’s cafeteria the participants were finally introduced to the case that was going to be the heart of the Academy for the next four days. They were divided in two groups and got the first chance to prepare and conduct a plenary session as claimant and respondent in the case.

Subsequently, Stefan Hofmann, Partner at Watson Farley & Williams in Hamburg, gave a presentation about case analysis techniques, followed by the next plenary session implementing those newly introduced methods and professional feedback by the workshop leaders.

The first day ended with a guided tour through the old city center of Cologne and a dinner at the traditional brewhouse the “Malzmühle”, introducing the participants to the culture, history and food of Cologne.

The workshops on Tuesday began with Professor Berger and Oliver Marsden, Partner at Freshfields. The topic of the workshops was the issue of oral pleadings. Mr. Marsden had prepared handouts for all the participants to give them an overview of the basic structure of oral pleadings. In order for all participants to become involved in the discussion and have the chance to experience oral pleadings, the whole group was divided into claimants and respondents and settled into two different rooms. Mr. Marsden listened to the discussion in these two groups personally and gave individual feedback. After the discussion, there was also a simulation of an oral hearing. After the simulation, Mr. Marsden gave feedback on the performances of the volunteers from both sides. Tuesday’s workshops ended with a round of applause to all the voluntary participants in the simulations. 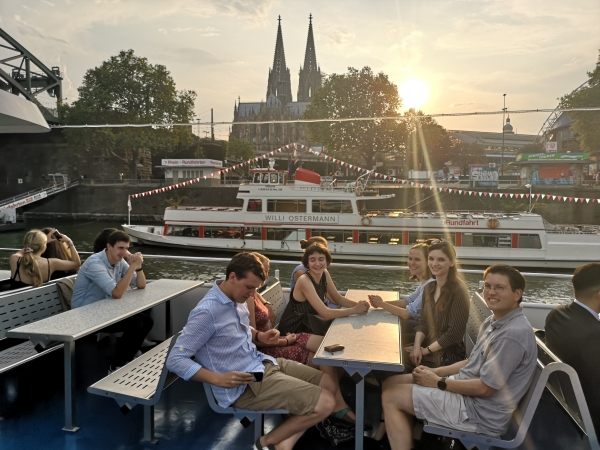 The evening program included the cademy’s tradition, a boat trip on the river Rhine. The dinner buffet began after Professor Berger’s opening speech.. Even though the weather wasn’t ideal for a boat tour, the participants and faculty members had a great time with good conversations, a delicious buffet and Kölsch beer. To finish the evening, a few people explored the bars and pubs of the old city.

On Wednesday, Professor Berger and Steven Finizio (Partner at Wilmer Hale, London) introduced us to the taking of evidence in international arbitration. Not only were we made aware of the critical role that the establishment of facts plays to the outcome of the case, and the challenges to bridge the gap between different legal cultures, but we were also taught how to navigate our way through some of the pitfalls of document production and witness examination in practice. The newly learned lessons were then put into practice by holding mock evidentiary hearings: demanding the production of documents by the opposing party, while refusing to surrender documents of one’s own client, and later on, trying our best to examine and cross-examine a particularly challenging witness (Professor Berger himself performed the roles of multiple witnesses with infectious enthusiasm), all the while carefully avoiding the use the infamous “D-word” in reminiscence of the swear jar introduced by Professor Martin Hunter himself at this very academy more than a decade ago.

On the final day of the arbitration cademy, Dr. Torsten Lörcher (Partner at CMS, Cologne) provided us with valuable insights into the decision-making process of arbitral tribunals, as well as into remedies available in the post-award phase of an arbitration. After developing an understanding of the different types of arbitral decisions, we again applied the newly learned lessons by examining the enforceability of an arbitral award that had been handed out to us on the previous day.

In the afternoon, a joint session was held, joining together the arbitration and mediation groups. This final session was moderated by Professor Berger, and together we drew a comparison between arbitration and mediation as different means of dispute resolution, evaluating their respective strengths and weaknesses, and ultimately, mastering the supreme discipline of combining both approaches in scalation clauses. The Arbitration Academy then concluded with the ceremonious distribution of the certificates for the successful participation in the 17th Cologne Academy on International Commercial Arbitration, and the 14th Cologne Academy on Business Negotiation and Mediation.